Like many couples, The Russian and I relish the evenings when we’re both free so we can have date night.  We were both feeling something different, and decided on Windsor Dim Sum Cafe in Chinatown. While The Russian has actually spent time in China, I’ve never had Dim Sum before, and I figured it was about time.

Dim Sum what I call “Chinese tapas,” basically small plates of food on the cheap, and Windsor is thought to be one of the best in town. I definitely agree. The Russian and I were greeted with a complimentary pot of tea: 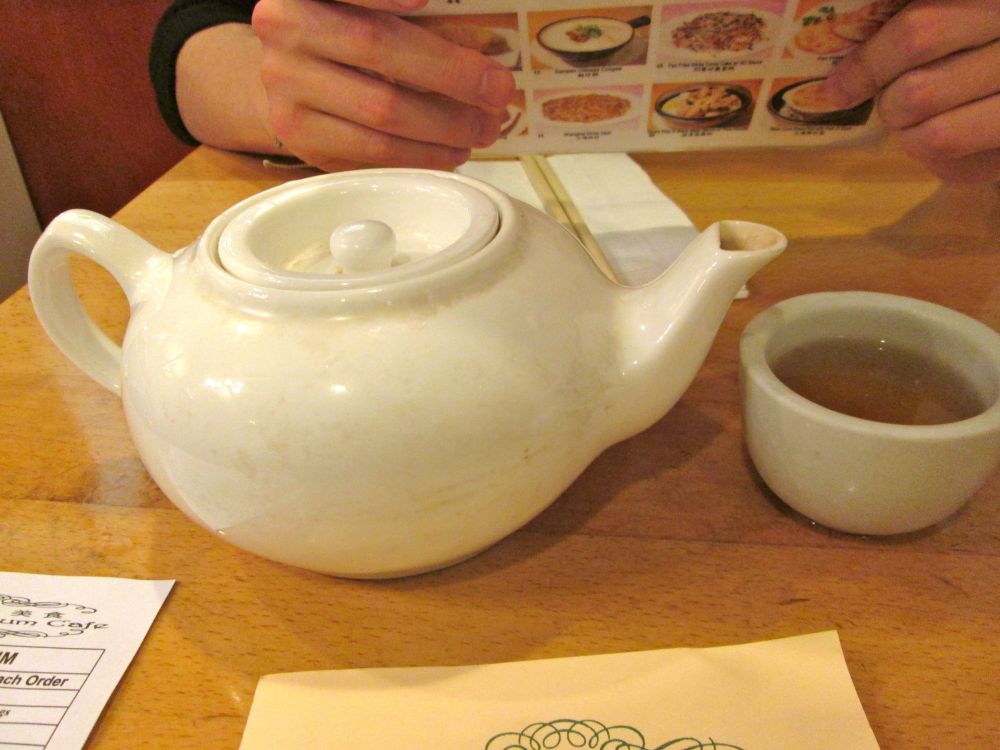 of course The Russian was not satisfied with just tea, so he got a peach slushy.  After tasting it, I have to say, I was jealous I didn’t get one.  If this establishment served rum and had a porch, I would probably stay there all summer. So refreshing and sweet, but somehow not cloyingly sweet.

and menus with cards where you fill out your selections.  Windsor is small, so it doesn’t have traditional carts of food constantly pushed throughout like larger Dim Sum places.  Next time. One thing I really enjoyed was that although the carts were not available, they still provided a chance to choose your dish by visual stimuli with pictures of all the dishes offered.

I haven’t even mentioned the best part: Most of the Dim Sum is $3.15 a piece.  That’s right.  We got about eight items and spent $30.  For both of us. It was so much food, I’m not sure we even finished half.

While I thought everything was very very (read: VERY) tasty, I did have a few favorites, though I cannot for the life of me remember the actual names. In all honesty, I believe you can try anything on the menu and be satisfied. We started with these fried rolls filled with shrimp, celery, and cilantro:

Then the food started rolling out faster than I could even register.  Shrimp and pork dumplings were rich and meaty:

The steamed pork dumplings has a sweet, chinese bbq filling wrapped in bread that was incredibly light and fluffy.

We also had some of the best fried calamari I’ve had.  Light and crispy batter and a perfect amount of salt and spice.

Finally, I had to try something new, so I ordered short ribs and chicken feet over rice, a more expensive purchase at the mind boggling price of $5.  Well worth the extra $1.85, as I not only got to try something new, but both meats were stewed in a black bean sauce and fell apart as soon as I tried to pick them up with my chopsticks (forks don’t seem like an option here).

Now I’m not saying this place has a perticularly beautiful decor or helpful staff. It doesn’t really.  It also doesn’t matter.  We had an amazing meal for next to nothing, and that’s what it’s all about anyways.